“Now to you I say, and to the rest in Thyatira as many as do not have this doctrine, who have not known the depths of Satan, “I will” put on you no other burden on you and hold fast till I come.” Revelation 2:24 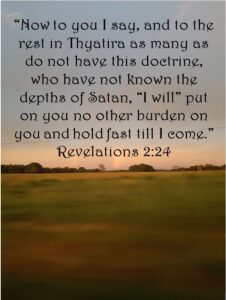 This promise of hope that came to Thyatira was so needed to the faithful few standing for truth as they were being forced to live a pagan lifestyle of compromise for survival. Rules founded on Satan’s thinking of releasing spiritual responsibility and substituting intellectual enlightenment of love for self – first, last, and always were heading up the program.

We can see the same type of controls being placed on different people from different countries demanding those inhabitants follow the dictates of man-made thinking today. As these controls become “new laws” for all; Do not be deceived when this way of living is called progress.  It is a self-centered, selfish system from false views of philosophy that depraved souls embrace for their own purpose. Join our conversation to Stand Strong and reap the promise.