Our society has and is continuing to make drastic bold changes in wanting us to adapt to “moving forward” and leaving the past behind, making all things new. Sounds uplifting but there is as much danger in those “smooth” words as there was in the words spoken in the Garden of Eden.

That may sound like a harsh declaration, but we need a wake-up call as there is a bigger picture been painted right before our very eyes and the strokes being applied will capture a scene that destroys.

We have established false religions since the Tower of Babel was being constructed when God dispersed the people as they gathered to all speak the same language.  He confused their attempt.

In New Testament times, false thinking was having a heyday, and Paul and the disciples set about by:

In more current times we are told we must accept certain “ISMS”:

ISMS are a distinctive doctrine, cause, or theory. They are an oppressive and especially discriminatory attitude or belief we all must come to grips with our isms.

Here are a couple of examples of what the “different thinking” wants us to accept:

These types of false beliefs have set us up for man-made conclusions and how we need to update our beliefs.

Here are just a few “isms” that we battle the consequences of their philosophies:

Hedonism philosophy: The ethical theory that pleasure (in the sense of satisfaction of desires) is the highest good and proper aim of human life.

IF it feels good, it must be right.

Our senses are what we use to determine what we want.

Happiness is a feeling goal, a “have to have” based on your circumstances.

The counter is joy which is a “state”, an attitude that sustains you no matter what your circumstances are.

HUMANISM: any system or mode of thought or action in which human interests, values, and dignity predominate.

We should always make a distinction between Humanism and humanitarianism. The latter is a more or less sympathetic interest in humanity, while the former carries with it a definite faith in MAN as the director of his own destiny, founded upon the latest scientific conception of the universe and man’s place in it.  Man is not totally lost but has goodness within himself and can make himself better and solve man’s predicaments.

There are four goals of Humanism:

If humanism can become the god of final authority, then we have no definite design, purpose, or morality. Anything goes that man wants.  Everyone does what is right in their own eyes.

PLURALISM: All views of living are equally valid, a political philosophy holding that people of different beliefs, backgrounds, and lifestyles can coexist in the same society and participate equally in the political process. Pluralism assumes that its practice will lead decision-makers to negotiate solutions that contribute to the “common good” of the entire society

We see in the last 100 years where there is an aggressive indoctrination to accepting men in authority to blend their ideas together to form a new whole. We find points of common ground and unite under those points we deem best, regardless of scripture precepts.

We try to find common ground regarding us all accepting each other in “love” but denying GOD IS LOVE.  Instead of using His agape love as the standard, we lower the bar of what love is and use man’s standard so we can agree upon what coincides with helping to establish a human rule.

RATIONALISM: A Belief or theory that opinions and actions should be based on reason and knowledge rather than on religious belief or emotional response.

If reason and experience are the basis for Truth, then there is no ABSOLUTE Truth.  Relativity affects the ability to discern Truth from error, right from wrong. Jesus said, “I am the way the Truth and the life. No man comes to the Father except through Me.”

EVOLUTION/Darwinism: Theory is the notion that all life is related and has descended from a common ancestor, the birds, and the bananas, the fishes and flowers are all related.

This thinking basically is that the development of life and species evolved from nothing into something. If God does not exist, then what other meaning is there for the human-animal other than survival of the fittest?

MATERIALISM: A tendency to consider material possessions and physical comfort as more important than spiritual values; the doctrine that consciousness and will are wholly due to material agency.

Greed, possessiveness, covetousness are other words that express the attitude of being materialistic. Life consists of the things you have that fulfill the desires of your pleasure and worth.

EMPIRICISM: Knowledge originating in experience, relying on observation and testing in natural science utilizing the senses of taste, smell, feel with sight and sound being the most prominent of the five.

It has become a medium to use the senses, especially sight and sound. It’s used in education, to market and sell products, i.e. commercials. In our society, this is a massive amount of information to assimilate.

The result is thinking with sensations; feelings over reasoning, instinct over rationality. This has caused many to think that truth is relative because emotions change.

There are simply too many to break down here but here is a list of nouns that have the “ism” ending resulting in beliefs that if not in agreement with Scripture will lead to falsehoods.

ABSOLUTISM; Also known as Divine Right Theory: The King rules with unlimited power and subject to no constitutional safeguards or checks. When God is the Ruler all is well.  When man is ruler, destruction awaits.

EGOISM:  The theory that self-interest is the basis of morality. Pride reigns supreme and blinds all who make man the source of worship and praise.

FATALISM:  A doctrine that all events are predetermined in advance. This reduces our freedom to choose in making decisions for good or bad. This destroys God as Sovereign in being the ultimate ruler in everything.

LIBERALISM: A political orientation favoring social progress by reformation. This is a process of improving something or someone by removing or correcting faults, problems through the change of old patterns of thinking.

Again, man sets the priority of what needs to be fixed, not the Truth of Scripture. It is man’s agenda, man evaluates the issues, and then man’s opinions are the gauge for how to restore. This extends into the religious and political areas of living.

SOCIALISM:  A political theory advocating state ownership of industry. If this is dominant in society it sweeps away capitalism. The danger in this view is that no one can have less or more than another.

The government can take what you have earned and obtained, redistribute without your consent, and give it to others so everyone has the same. A common expression is that there is an idea of taking without contributing, better known as Entitlement. The danger is government sets an exclusive standard for those in government as they have the power to give and take. This is the path for a dictatorship to control a nation through oppression. There can be different branches of government making these choices.

TOTALITARIANISM: The belief in unrestricted power in government. The government makes all the decisions for the society, robbing the people of any ability to choose or participate in matters that govern everyday living. No multi branches of government; there is only one branch.

There are many spin-offs from these main ISMS.

We need to be educated about these out-of-control vain philosophies. Taken to extremes will destroy a nation, cripple societies, and ruin lives. All these belief systems are against the Christian Biblical worldview from Scripture and ignorance in understanding these false values will result in destruction.

HISTORY has revealed this to be factual. However, as history has proven, we do not learn and repeat the same lies. Without Jesus Christ, people love darkness and selfishness.

A Democracy will last about 200 years because the acceptance of these ISMS will invade a nation and the greed of man’s heart of those in authority will use the ISM to vote themselves (money) from the public treasury.

From that moment on, the majority always votes for the candidates who promise the most benefits from the public treasury. The end is a final collapse over loose fiscal policy, which is always followed by a dictatorship rule in government, destroying a nation’s freedom. 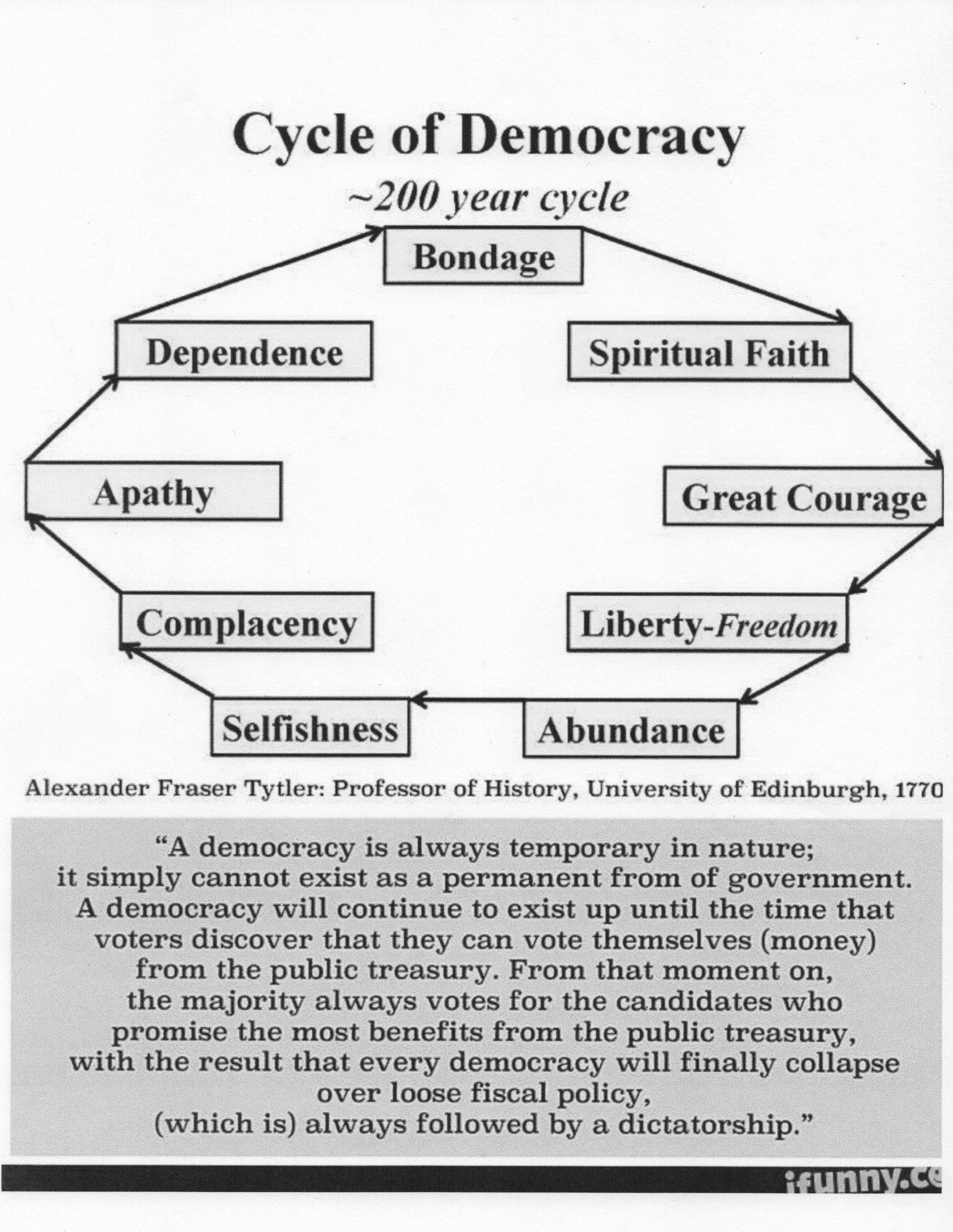